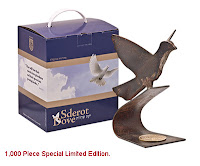 The project dove is a recent project that has been launched to support the city of Sderot. Israeli artist Eldor Levy has created 1000 pieces of a sculpture of a dove. Eldor has served in Sderot as an IDF soldier and witnessed the harsh reality of Sderot under the constant rocket fire.

This piece of art is a protest against terror: the universal symbol of piece is made of actual pieces of Quassams, the missles used by terrorists that have taken the lives of innocent people and brought destruction upon the city of Sderot.

In addition to receiving a unique piece of art, purchasing this product has a social significance: a contribution to the community that has lived under the terrorists' attacks for more than nine years.

With this purchase, you have the power to make a difference. Show your solidarity by supporting the people of Sderot. click on the image to purchase!