Give Someone a Luck Charm - Jewish Jewelry featuring the Hamsa Hand

If you're looking for a suitable gift for the upcoming holidays, a Hamsa hand necklace or a bracelet is a great idea. In the last few decades Hamsas have become very popular all around the world. The symbol has been adapted by various cultures including Islam and Judaism.
All around the world the Hamsa hand is basically used for the same purpose: to ward off the evil eye and bring good fortune.

Today, the Hamsa hand is one of the best known Jewish symbols. In Jewish tradition, the Hamsa Hand is associated with Miriam, the sister of Moses and Aaron.  It is called Hamesh in Hebrew, the hand of Miriam or the protected hand of God. In the Kabbalah the five stretched hand of the Hamsa hand are thought to represent the five books of the Torah.

The Hamsa hand thus, can be often seen on Kabbalah inspired jewelry. It should be noted
however, that the Hamsa hand is not a religious object.

Hamsa necklaces and bracelets become more and more popular since they bring symbolism and personal style.

The shape of the Hamsa hand resembles of a hand with five fingers but unlike the human hand, the Hamsa Hand is symmetrical, with thumbs on both sides. Hamsa necklaces and bracelets often incorporate several motifs that are believed to ward off negative energies. Based on the Kabbalah teachings, certain symbols are considered to bring good luck and abundance such as images of fish and Hebrew inscriptions as the 72 Names of God.

Hamsa necklace or bracelet is a great gift for a family member or a good friend.

Here are my picks of Hamsa jewelry: 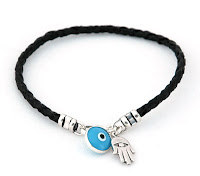 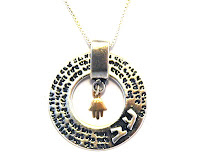