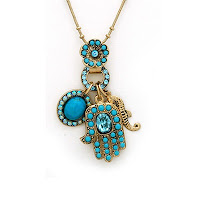 This beautiful Hamsa necklace, which I'm pretty sure that every woman, would like to have, comes from a renowned Israeli jewelry design studio, Amaro Jewelry. Irit Goffer-Sasson, a career woman and a mother of four, runs this successful company. A graduate of Instituto Europeo di Design in Italy, Goffer Sasson has become known for her imaginative eye and distinctive style. Today, Amaro is one of the best known Israeli jewelry design studio in the international market. Amaro's magnificent collections can be found in jewelry shops in Israel and all across the world.

This Hamsa necklace is one of the most popular items by Amaro jewelry. I have chosen to introduce you this piece because it well exemplifies what has become known as Amaro style. This piece shows Goffer-Sasson's unique style which combines western and oriental elements. Goffer-Sasson's signature look has gained world-wide reputation and for a good reason. As a constant traveler, Irit Goffer-Sasson draws her inspiration from her surroundings. This Hamsa necklace by Amaro Jewelry is gold plated and set with semi-precious stones.

Hamsa necklaces or pendants are always great gifts for someone that you care about or yourself. The Hamsa hand is an ancient motif that is believed to ward-off the evil eye. The Hama has been adopted from Islam by Judaism and western culture. Today Hamsa is one of the most popular luck charms, worn by millions men and women around the world, including celebrities.

You can also visit Amaro official website
Posted by The wonderer at 10:57 AM