This beautiful pendant features the most prominent Jewish motif - the Star of David. As you can see in the image it is also inscribed with the 72 Names of God - a spiritual tool used by  Kabbalah to enhance positive changes in our lives. Together they create a powerful Jewish charm.
So what are the 72 Names according to Kabbalah?
The sacred names are comprised of 72 three-letter combinations from the book of Exodus from which the Kabbalah derives its answers to various aspects of life such as love and health. Each of the 72 names of God has its unique spiritual energy energy depending on the purpose. Aleph-Lamed-Dalet is a combination used to ward off the Evil Eye, Shin-Lamed-Heh is used to imbue love and relationship and so on.
Star of David and Kabbalah
The Star of David is a popular motif in Kabbalah jewelry. The Star of David has been used as a protective amulet in many cultures across Europe. The Star of David had used in religious practices to fight demons and evil spirits. The shape of the six pointed star was the Star of David was believed to possess special supernatural qualities. Similarly, the Kabbalah practitioners used the Star of David as a tool to ward off negative energies. You can find this Kabbalah pendant at the Israeli gifts store. 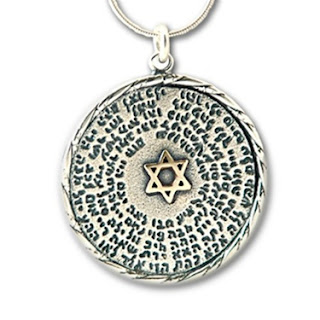 Due to its special shape, the Star of David is believed to draw powerful energies that provide the wearer with blessing and protection.
Contemporary Israeli designers have created wide secetion of handcrafted Kabbalah jewelry accessories that incorporate the Star of David motif.
Posted by The wonderer at 1:10 PM