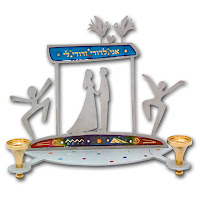 The Jewish wedding ceremony takes place under a big canopy, called in Hebrew Chuppah. Under the Chuppah the happy bride and groom share a mutual promise by saying to each other: "I am my beloved's and my beloved is mine" or as pronounced in Hebrew -Ani LeDodi VeDodi Li (Song of Songs: 3:6). Song of Songs is believed to have been written by King Solomon. This psalm is traditionally interpreted as the divine love that God has given to the people of Israel. The people of Israel are seen as the wife, the beloved, and God in the one who blesses His beloved with eternal love. This promise also embodies the sacred relationship between a husband and wife in Jewish tradition.

Today, I would like to bring you several Ani LeDodi gift ideas that are perfect for anniversaries and Jewish weddings. Several of the most popular Jewish wedding gifts are ornamental objects that have symbolic significance. Judaica articles are very popular Jewish weddings gifts as they are both practical and decorative and have religious context. Shabbat candlesticks, Mezuzah cases and Hanukkah menorah are very appropriate gifts for Jewish wedding. A special gift jewelry such as a pendant or necklace inscribed with Ani LeDodi for the bride is another special gift idea. Below, Ani LeDodi Mezuzah by Israeli artist Yossi Steinberg, who has also designed the magnificent candlesticks above. 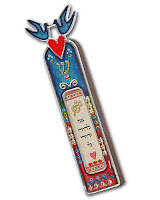 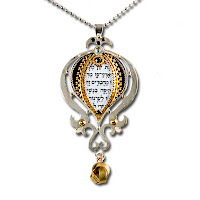