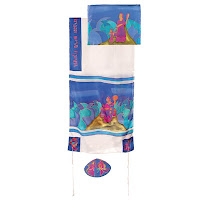 As I have reported on my Jewish news blog, The Optimistc Jew, there is now a first female African-American rabbi. According to Times, Alysa Stanton, 45, will become America's first female African-American rabbi in two months from now. Today she has completed seven years of rabbinical training at Hebrew Union College. Stanton will serve as the rabbi of Congregation Bayt Shalom, a synagogue in Greenville, N.C. Well, this is a big step for Jewish feminism. To celebrate that, I've decided to bring you here several Tallits (Jewish prayer shawl) that are specially designed for women. Tallit is usually worn inside synagogues and during the morning services.

on the image above- Tallit for women- Miriam and Deborah

As you might know, there is a strong disagreement in the orthodox community whether women should be allowed to wear a Tallit. In reform and conservative communities, by contrast, Tallit is worn by women as often as by men.

Different Jewish scholars have argued that wearing a Tallit by a woman is a sign of
vanity. However, many rabbis today permit this practice. Today, even in modern orthodox communities more and more women proudly wear their Tallits. No one can stop ongoing social changes.

Tallits for women often include biblical motifs that signify the significance of women in the bible. Miriam, Moses and Aaron's sister, took an active part in the story of Exodus and provided an infinite source of water for the Israelites in the Sinai desert (today this is celebrated through the use of a new ritual article- Miriam's Cup) . Deborah the prophetess was the only female leader of the Israelites.

These Tallits for women are designed by Israeli judaica artists, Yair Emanuel - one of the most distinctive artists who live and work in Israel today. Emanuel's artistic designs of colorful Tallits make great gifts for Jewish women that is both practical and symbolic. 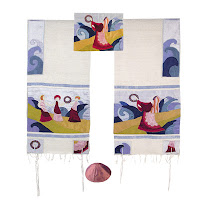