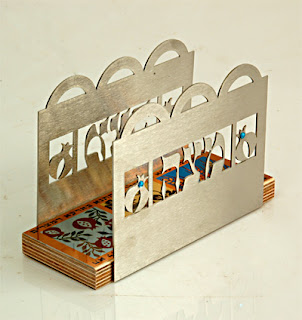 During the eight days of Passover, we are not allowed to eat bread. We avoid any kind of food made of flour, and eat a special flat of bread called Matzah (Matzo).

So what's behind this custom? When the Israelites escaped from the hand of Pharaoh in ancient Egypt, they didn't have enough time to let their bread rise. On Passover, we eat Matzos to commemorate the successful escape of the Hebrews from Egypt.

As part of Passover ritual meal, the Seder, matzos are placed on the table. The matzos are often placed in a special tray, known as Matzah plate. Matzah plates usually include prominent motifs in Jewish tradition, like the seven species that the land of Israel was blessed with.

This laser-cut Matzah plate by Judaica artist Dorit Klein is a wonderful example of how modern art is successfully combined with traditional motifs.
Posted by The wonderer at 6:37 PM