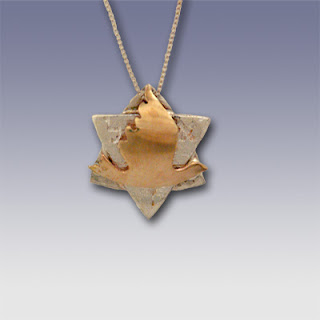 Israeli singer, Achinoam Nini, who is internationally known as Noa, has recently collaborated with Israeli-Arab singer Mira Awad. Together they will represent Israel in the annual European Songs Contest, 2009 Eurovision in Moscow.

Noa has become internationally known as the performer of the theme song of Oscar-wining film Life is Beautiful.

As Noa has told the press, witnessing the last conflict in Gaza, she decided to bring some hope back to the Israelis and Palestinians. And so Noa contacted Mira Awad and offered a duet. This fantastic song"There Must be Another Way" (Your Eyes) is the result of this unusual artistic collaboration. The song was written by Noa and Mira and Israeli musician, Gil Dor.

In this context, I want to introduce you to this special piece by Israeli Judaica designers. I call this item the peace or Shalom pendant. As you can see, this Star of David pendant beautifully shaped as a dove (the golden part), the eternal symbol of peace. This unique piece is also made according to Kabbalist method: the blending of five metals (gold, silver, lead, tin and copper) when Jupiter rules the moon, is believed to draw divine protection to the bearer.

Good luck to Israel in the Eurovision contest which will take place in the 16.5.2009, let us keep our fingers crossed. I'll keep you updated.

To read more about the duo in Haaretz.com click here
Posted by The wonderer at 4:47 PM